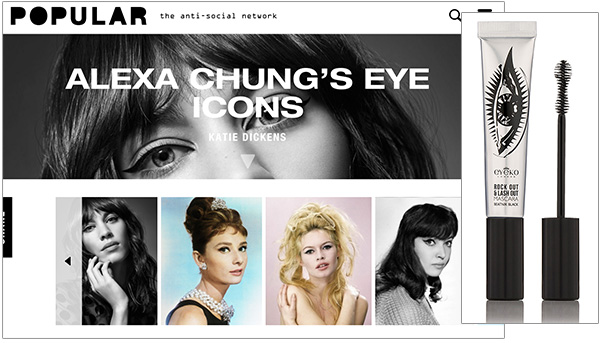 “It Brit Alexa Chung is best known for her enviable style, but those feline-like eyes are equally noteworthy. She regularly plays her peepers up with expertly-applied liquid liner and loads of mascara, which is probably why Eyeko enlisted her as its celebrity face (and one of its designers, too).

The brand teamed up with Rockins, the maker of silk scarves favored by Kate Moss and Rita Ora, on designs that put Chung’s gaze front and center, and now, the same images don the packaging for Eyeko’s latest offering: Rock Out & Lash Out Mascara.

Given Chung’s expertise, we wondered—which style icons have the most unforgettable eyes? She sets us straight.

Audrey Hepburn
“Hepburn has Bambi eyes that she famously played up in Breakfast at Tiffany’s with a slick of a black liner and plenty of mascara.”

Brigitte Bardot
“The Bardot bombshell is a classic. Liner inside the eye added even more drama to this sex kitten—so feline, she had makeup to match.”

Anna Karina
“She always looks like she’s on the verge of tears. True sadness, or clever makeup?”

Courtney Love
“The nineties grunge era and riot grrrl sound had its own strong beauty aesthetic. An abundance of smudgy black kohl defined not only Courtney’s eyes, but also the look of the decade.”

These are the important makeup expiry timelines you should know

‘Tis The Season to Shine | Discover Holiday Gifts at Eyeko

Build Your Own Duo: Pick Your Perfect Mascara and Eyeliner

3 Steps to the Perfect Mascara Made for You: Eyeko Bespoke Mascara Bar at Selfridges Now!